My latest attempt at making a game is a team effort with my best friend and programming guru, Jett. It is called Smugrubber, you can play it in your browser here or view the github repo here.

The game is a browser-based 2d shooter arena featuring multiplayer combat (soon) in a procedurally generated environment full of 2d physics fun. It takes a lot of inspiration from a mutual favorite game of ours, called Soldat. It also includes Super Smash Bros style of "knock them off the map" gameplay.

The game is built using:

Besides the procedurally generated game world, one of the coolest features is that bullets are physics objects; their speed, size, and density determines how much damage your character takes, and how much you're knocked back. The knockback effect multiplies with the more damage you take.

It began as a kind of arcade version of Angry Birds, then becomming something of a ninja-with-a-grappling-hook arcade game. It's obviously still a work-in-progress: the project is fully available on GitHub.

dieStorm is a multiuser dice-rolling application built in MeteorJS for deploying in Sandstorm. It was created for a presentation at Twin Citeis Code Camp.

I'm a lifetime Dungeons and Dragons nerd. My father inducted me into geekdom from a young age, and is still the dungeon master of what could very well be the longest running Dungeons and Dragons campaign in the game's history. I've been playing for probably 15 years now with about a half-dozen other guys. Because of life's inherent entropy, it is increasingly hard to get together, stay awake for an entire weekend, drink beer, and play "The Game" as the years progress.

Though nothing beats getting together in person, there are a few tools available to digitize the experience. I had been Google Docs for things like drawing maps to try and emulate tabletop sharing, but it always felt disjointed.

Sandstorm can be an excellent tool for a small group of people that need to share specific a set of SaaS-type web apps. I recently implemented Wikimedia Sandstorm to use as a tool to collectively keep track of important game events and things. I EVEN BUILT A THING. 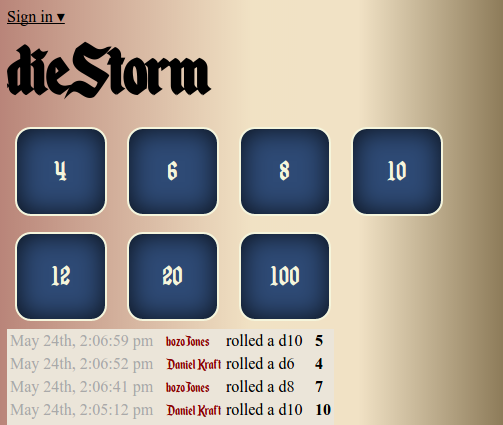 This project started out as a demo for a presentation I was to give at a conference. You can read more about it on Github.